How To Use Bone Broth To Heal Your Gut 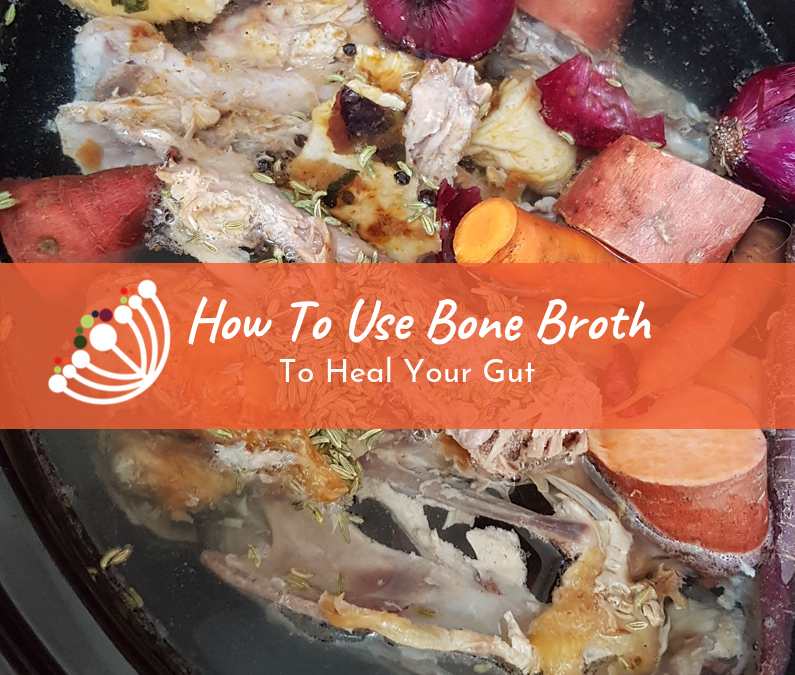 Bone broth is a hugely valuable tool in your digestive-healing toolbox. Seriously, huge.

Let’s start with some benefits:

Promotes healthy digestion by healing & sealing your (leaky) gut
Reduces joint pain & inflammation
Promotes strong & healthy bones
Inhibits infection caused by cold & flu viruses
Fights inflammation
Promotes healthy hair & nail growth
Known as anti-ageing
In this blog, I’ll share with you:
Why broth is so good for your tummy – some simple science (you can skip this bit if you want to)
How to use broth
Who can use broth
Where to find bones
How to make broth
How to store broth

1. Why broth is so good for your tummy – simple science

Collagen, the glue that holds the body together, breaks down into gelatin.
Gelatin is the ‘jelly’ consistency of the broth that appears when refrigerated. Broth also contains minerals such as calcium, magnesium, phosphorus, potassium & other minerals which are easily absorbed by the body.
It’s this sticky collagen that reduces as we age, causing skin, joints and other body parts to become drier, thinner and weaker.
Fats better tolerated than carbs
In a 1908 textbook, it was noted that fat was much better tolerated than carbohydrates by coeliac patients. It was also believed that the gelatin was beneficial to anyone with digestive disorders, not just coeliac disease.
It was understood that carbohydrates were fermented by our digestion. Replacing with complete proteins there was a risk of protein putrefaction (fermentation – think rotten smells!). However, gelatin, was easily absorbed within the digestive tract supplying energy without the fermentation.
This benefits your tummy
Gelatin gives your digestive system a much-needed rest, often important if you have digestive issues. Later in the century, it was believed that by having it in the diet, food intolerances may be better tolerated as the gelatin seals a ‘leaky gut’. The main 4 amino acids (building blocks of protein) in broth are proline, glycine, glutamine & alanine.

2. How to use bone broth

The ideal way to use it is part of a soup or casserole that includes high-quality animal protein such as fish, meat, organ meats, poultry, eggs or dairy. This ensures your diet is rich in complete proteins.

How long do I cook broth for?

Short-cooked 4-6 hours (best on a hob)
Long-cooked 12-24 hours (best in a slow cooker)
The longer you cook it, the more flavourful and gelatin-rich it will become

Generally, bone broth has a long history of safety with an absence of unwanted side-effects.
However, cooking broth for longer has three times higher levels of amino acids. If you are sensitive to MSG, a flavour enhancer, or have histamine issues it is possible you may feel sensitive to bone broth, particularly if long-cooked. Therefore you may want to start with short-cooked broth first.
If you have SIBO (Small Intestinal Bacterial Overgrowth) you may find it an irritant due to the polysaccharide content. Extremely sensitive people may prefer to use meat broth (simmered stew meat, not bones).

4. How to find bones

Get your bones from a good butcher, ethnic food market or an organic box delivery scheme. It is preferable to use organic, grass-fed animals, not those raised in confined feeding operations (known as CAFOs or battery animals).

I find I get them free if I buy something when I am there. Ask for bones than contain lots of cartilage such as feet, knuckles, beef shanks, short ribs. You can freeze bones from leftover roasts or meals if you don’t have time or not enough bones to make broth that day. I have lots in my freezer and often use two carcasses to make a really rich broth.

5. How to make broth

Monday is broth-making day in my house after a Sunday roast. You’ll never again throw away a hugely valuable carcass!
To extract the minerals from the bones, add vinegar so your broth gets the additional goodness. I recommend Braggs organic raw unpasteurised apple cider vinegar, but wine vinegar will suffice.
Use whatever vegetables are in your salad drawer (except broccoli, cabbage, cauliflower, sprouts which are bitter in broth) – it’s a good way to clean out wilting veg! I don’t bother peeling them.

Using a raw chicken: This recipe is for a cooked carcass, but you can cook the chicken whole (as in the picture), just remove the giblets first and ideally break down the bones – then you can remove the meat from the bone after 2-4 hours (use in salads, soups), then carry on cooking the bones for 12-24 hours.

Hob version. Bring a large stockpot to a boil and remove any scum that rises to the top, reduce to a simmer, leaving the lid askew if needed. You will need to check this often to ensure water is topped up to keep the bones covered or that it doesn’t boil dry. Cook for 6-8 hours if using the hob method. A slow cooker is safer to leave unattended if you go out.

6. How to store broth

Broth can be frozen for many months or kept in the fridge for about 5 days.
Ideal fridge storage is in glass Kilner jars (available in Lakeland, Homebase & Amazon). If freezing, fill only ¾ full to allow for expansion and only freeze when the broth is cooled down.

Freeze in ice cube trays for flexible use. This is ideal for when you need only a cube or two. It also means you don’t waste any valuable broth that’s sat in the fridge too long.
It is preferable to use silicone or stainless steel ice cube trays.
Storing hot, fatty foods (such as broth) in plastic containers leaches chemicals from the plastic into foods. These are known to be hormone-disrupting chemicals. Please avoid where possible. Only put into plastic ice cube trays when the broth is cooled.
When frozen, transfer the cubes to a plastic bag for easy access.

Happy broth making! Your digestion will thank you.

We use cookies to ensure that we give you the best experience on our website. If you continue to use this site we will assume that you are happy with it.Ok